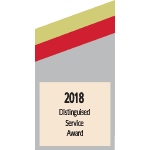 DFPG Investments is pleased to announce that Dave Laga, principal and Chief Investment Officer, was awarded the Distinguished Service Award by ADISA, the nation’s largest trade association for alternative and direct investments.

In a press release commenting on this year’s award recipients, ADISA Executive Director and CEO John Harrison said, “Each of these recipients have adhered to the highest ethical standards and quality performance in the industry and have demonstrated a commitment to excellence and service.”

According to ADISA, the Distinguished Service Award is presented to individuals and companies who have provided exceptional service to ADISA, the alternative investments industry, and the overall community.

“On behalf of the entire DFPG family, I want to congratulate Dave on this remarkable accomplishment,” says DFPG CEO Mike Bendix. “Dave is a well-regarded and respected professional within our industry, known throughout for his expertise and experience in due diligence. He’s an invaluable member of ADISA and the DFPG family.”

In addition to being past president at ADISA, Bendix received the 2014 ACE Award, which is ADISA’s lifetime achievement award. DFPG Investments received ADISA’s 2017 President’s Award, which is given to an individual or organization that has made outstanding contributions in their chosen field, by service in local, state or national affairs, or in support of the advancement and continued excellence of ADISA.